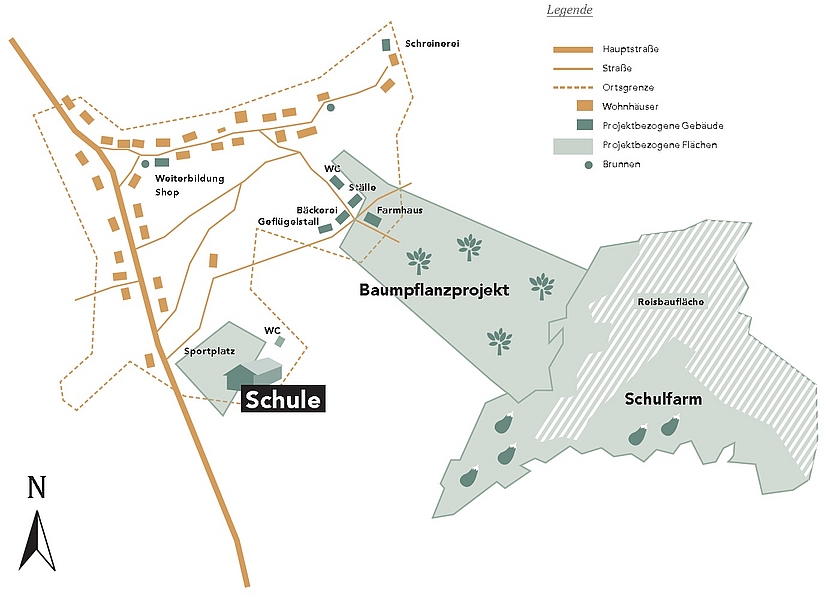 In Forikolo we completed our first school in 2006 – a primary school. This was followed by further projects in the village to improve the nutritional situation (farm projects). In Forikolo there is now even a bakery and a carpentry, which could also be built through the efforts of Forikolo e.V. In addition, we planted several thousand trees in the village and built toilets and a playground.

2006: The construction of the elementary school in Forikolo

The school building, provisionally constructed by the villagers, could not withstand the heavy rainfall and storms during the rainy season and had to be rebuilt every year. This intolerable condition had to be changed in the interest of the children in Sierra Leone.

“ONE School for Sierra Leone” was the motto and goal of Forikolo e. V. After a long search for sponsors, the construction of the new school in Forikolo could start in 2005, particularly through the support of the “Aktion Eine Welt” campaign and the Neumayer Foundation.

Under the guidance of Abu and George Mansaray and support from Germany, Freetown professionals, teachers, schoolchildren and parents worked hand in hand to achieve the grand goal.

Here is an insight into the course of a school building in Sierra Leone using the example of the elementary school in Forikolo.

The improved learning atmosphere also affects the performance of the students. Thus, the primary school of Forikolo was awarded a prize in the 2009/2010 school year for the best results of the national school leaving examination in the entire Lokomasama Chiefdom.

2008: The farm and animal breeding projects in Forikolo

According to the Food and Agriculture Organization of the United Nations, Sierra Leone is one of the countries most at risk of starvation. Malnutrition has lifelong effects on the development of children. When, in 2008, a feeding program was suddenly discontinued by the World Food Program, Forikolo e.V. decided to extend its projects to food security. A permanent solution was needed, no short-term help. In 2008, the construction of a large model farm in Forikolo started. Interested families were given tools and seeds and assigned their own fields. This gives the villagers the opportunity to farm in the long term. Further information about the farm project in Forikolo …

Following the example of Forikolo, a large farm project has also been set up in Musaya and Yurika since 2011. In addition to these large farm projects, almost every school built by the association has a small school farm where students learn how to cultivate fields and how to breed chickens, sheep and goats.

The development of the farm projects was supported in particular by the Rotary Club Leipzig, “genialsozial”, the “Aktion Eine Welt” and “MaleLe” (Leipzig Newspaper LVZ).

Thanks to the support of the Lukas bakery in Leipzig, three bakeries were built in Forikolo, Masulaimani and Kumrabai. There, the output from our agricultural is further processed. The baked goods ensure nutrition security and increase the income of the population. At the same time, young people from the area receive vocational training there.

10,000 trees that have been planted in villages within the project region also help to secure people’s nutrition. Most trees are fruit trees (e.g. mango trees). At the same time, the trees serve environmental protection.

This project could only be implemented thanks to the generous support of the “Evangelische Schule Berlin-Zentrum”.

A playground and sports field

In addition to our elementary school, we were also able to build a sports and playground. The kids love to play there.

2014: Solar system on the roof of the elementary school

For the schools to be open in the evening hours as well, we shipped solar panels for each of our schools to Sierra Leone with our January 2014 DHL shipment. The illiteracy rate among adults in Sierra Leone is very high (as a result of the civil war). Thanks to the solar panels, adults can now also learn to read and write in our school in the evening.
We thank the “Aktion Eine Welt” and all other supporters and donors for the implementation of this project!

Please support the construction of our next school in Tintafor!

In 2017 we want to build a school for the children in Tintafor. Currently the municipality has rented a house for the lessons which is too small for the 300 students and has no furniture. Please support us with a donation to build this school!